For the July Daring Baker’s Challenge, Ruth from The Crafts of Mommyhood challenged us to bake a cake. But not just any cake; she asked us to add in a special surprise for our eyes as well as our taste buds! (Note: Daring Baker’s challenges are supposed to be posted on the 27th, but I totally forgot to post it! So here it is:)

I have missed about a year and a half of Daring Baker’s Challenges, but last Thursday night, while sitting in front of my computer, bored, I decided to check up on what this month’s challenge was.  And when I saw that it was making a cake, using whatever recipe we wanted to, I knew I could do it.  The idea was to make a surprise cake – one that looked like a completely normal cake on the outside, but had something daring on the inside.  I decided to go for the rainbow cake.  My daughter loves to recite the colours of the rainbow, so I figured she’d get a kick out of this one.

After looking up different recipes for making a rainbow cake, I decided to go with my white cake recipe that I love from Starting Out.  The cake batter is quite simple to make (but if you like boxed cakes, you could use one of those too).  Once you’ve mixed the batter, divide it up between 6 bowls (or the number of colours that you want to use).  Add about 1/2 teaspoon food colouring to each bowl and mix.  It does over-mix the batter a bit, but the effect is so beautiful! 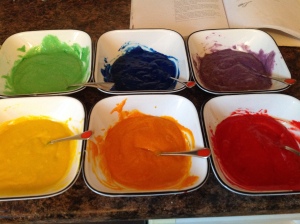 Then, to create the rainbow effect, butter / spray 2 8- or 9-inch cake rounds.  Add about half of the first colour to the middle of each pan.  Then add half of the second colour right in the middle of the first one.  Continue on with each colour until they’re all used.  It might be a good idea to spread it out a bit at the end – mine were really domed once I finished because I just left them as is.  Also, I wanted to experiment a little with the colours, so I started with red in the first pan and went through to purple, but then started with purple in the second pan to end with red.

Once I took the layers out of the oven, I just couldn’t bring myself to cover both with icing.  They just looked so beautiful the way they were!  So I ended up leaving one layer as-is and frosting the other one, as a true surprise-inside cake.  I wasn’t sure at first how to ice the second cake layer, as there were no birthdays that weekend.  But I just recently ran a 10K race and I was pretty proud of it, so that’s how I ended up decorating the cake.

Of course, after doing all that work, I remembered that I needed to bring some treats to church on Sunday.  So, even though I said I’d never make the cake again, I promptly made it on Saturday night.  This time my daughter helped me put it together.  We still used the 6 colours, but I layered them in a Bundt cake pan – creating sections of red, yellow, blue and orange, green, purple. You can see that the bottom of the cake was quite psychedelic  while the top looked like a normal cake.  I just drizzled the top with some glaze and then cut into it. 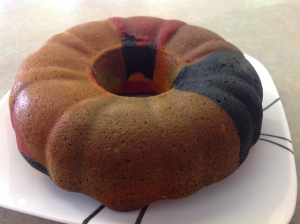 The effect was amazing!  Everyone was mesmerized by the cake and wanted to know how to make it.  No matter how you try the rainbow cake, it’s definitely a show-stopper.  I have a feeling I may get some requests for kids’ birthday parties in the next few months!